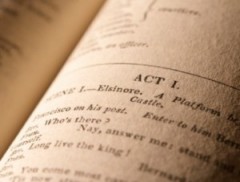 This college-level workshop explores the revolutionary method of the Royal Shakespeare Company.  Students receive coaching on a Shakespearean monologue specifically chosen for them.  The workshop culminates with an in-studio performance for friends and family, and students leave with a monologue that is audition-ready and the knowledge to conquer Shakespeare independently.

“I’m not saying you have to know Shakespeare to become a great actor, but I can say without hesitation that it certainly helps. Shakespeare is at the core of every serious actor’s training and experience, and the sooner you start the process the better… The fact is, not only is Shakespeare the greatest playwright of the English language; he has also influenced every single playwright who has come after him… Thus, knowing Shakespeare gives actors two significant advantages: First, it gives them a context for every part they’re acting; second, it gives them the technique they’ll need to be great performers.”
– Ken Ludwig, Backstage
(An internationally acclaimed playwright
who has had numerous hits on Broadway,
in London’s West End, and throughout the world.) In this Workshop, Students…